Petroleum is a naturally occurring fossil fuel found in geological formations beneath the Earth’s surface.

The word ‘petroleum’ comes from the Latin roots of petra, meaning “rock” and oleum meaning “oil”.

Petroleum consists of hydrocarbons of various molecular weights and other organic compounds. The name petroleum covers both naturally occurring unprocessed crude oil and petroleum products that are made up of refined crude oil.

Fossil fuels are formed when large quantities of dead organisms are buried underneath sedimentary rock and subjected to intense heat and pressure.

The oil and gas industry specializes in finding, producing, processing, and delivering usable petroleum-based fuel products to end users around the globe.

Learn more about our Online Oil and Gas Training Courses.

/pəˈtrōlēəm/
noun
noun: petroleum
“a liquid mixture of hydrocarbons that is present in certain rock strata and can be extracted and refined to produce fuels including gasoline, kerosene, and diesel oil; oil.”

Let’s start out with something very fundamental.

We also get into the category that would be known as the unconventional crude category from oil sands through the Canadians. Opportunity crudes, those are typically crudes that are very commonly blended at the least level or the bulk tank level.

The word dumbbell is derived because often times there will be a field unit or small topping unit that strips out certain components of the crude, the valuable components i.e. the naphtha and the crude is induced back in a pipeline to a refinery.

Maybe I’m not getting the value out of that crude. Crude assay will help explain why.

There are also a lot of lookalike blends at which is done on the up and up by midstream companies that want to make a boutique blend for a given refiner’s use. Again crude assays are employed so those different blends of crude can be to meet a refinery spec or a spec to compete in the world market.

The best example I know is the Canadians induced western Canadian select. It’s a blend of eight crudes basically designed to compete with the Mexican Maya heavy crude, so that is again a special blend.

Now let’s get down to the point here of what is a crude oil assay?

Well, again assays come in all types yet fundamentally are performed in laboratories and research centers using glassware in bench scale sizing to simulate refinery distillation towers, crude oils condensate feedstocks are cut into petroleum gases, petroleum products all the way through to the resid.

The primary use is to evaluate the performance of the hydrocarbons and evaluate the financial worth of each crude oil in different refinery conditions or petroleum marketing conditions.

I would also say that no crude oil type is identical as we all know they have critical differences we pointed out.

Often times fields of production for example, the Saudis have a variety of world-scale crudes in the market from the Saudi light to the heavy to the mediums to the ultralight and at any given point, some of these fields may be very mature, so the crude quality is relatively stable and may go back and do some infill drilling and change the molecular setup.

In other words, typically as a general rule, if a field changes more than about three API, people will tend to want to retest that in some fashion or other, typically some level of crude assay.

Why Do We Refine Petroleum?

Petroleum, or crude oil,  cannot be used as it occurs in nature, other than burning for fuel, which is wasteful,  It must be refined to manufacture finished products such as gasoline and heating oil.

In the refinery, crude oil components can first be split by carefully applying heat to capture various parts, called fractions, within certain boiling ranges. This is called distillation. The quality of these initial fractions produced is not sufficient to be sold directly as petroleum products without further treatment.

Moreover, the yield of products from straight distillation of crude oil is not the same as the “demand barrel” needed for the marketplace. Crude oil must therefore be further processed using both heat and pressure to improve qualities and meet market demand. 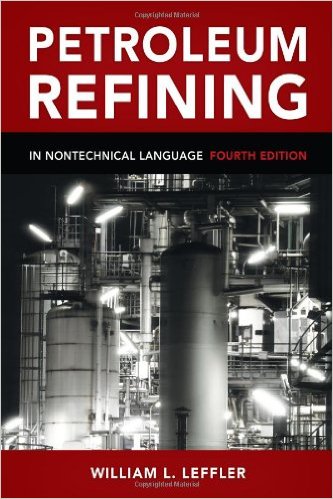 William Leffler’s Petroleum Refining in Nontechnical Language, Fourth Edition is designed to give the reader an overview of key refining topics by using relevant analogies, easy-to-understand graphs, formulas, and illustrations.

Each chapter was carefully written in nontechnical language to give the reader a basic understanding of the refining industry. The book can be used for self-study, as a classroom textbook, or as a quick reference.

To learn more you can visit the following pages: