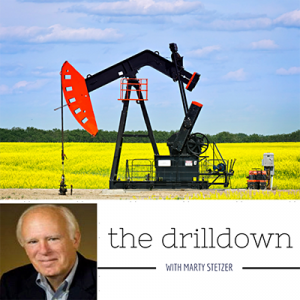 In this first podcast episode of The Drill Down with Marty Stetzer, I offer listeners the opportunity to hear my portion of the SPE Gulf Coast Chapter’s New Hire Orientation, a regular day-long training seminar offered by the SPE here in Houston.

This presentation has become the most popular seminar offered by the SPEGCS over the years.

In this introduction to the oil and gas industry, I generally cover current trends and opportunities in oil and gas while my co-presenters dive into more technical topics.

This role fits me personally as my company EKT Interactive has been focusing on new hire training and offering opportunities for those interested in oil and gas to learn more through our e-learning community, starting with Oil 101.

Oil 101 is a free 10-part introduction to the oil and gas industry.  It is available to everyone at www.ektinteractive.com.

Listen to Part 1 of the SPE Oil and Gas Orientation below: 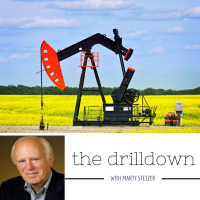 Get ready for OTC 2016 with our podcasts, interviews, ebooks, and more.  We discuss all of the trends and challenges relevant to this years Offshore Technology Conference.

I really appreciate the opportunity to again to present to the Society of Petroleum Engineers the new hire orientation which I’ve been doing since October of 2007.

In one jam packed day a series of senior experts will cover geology, drilling, completions, production facilities and offshore deep water technologies. It will be a little bit like drinking from a fire hose. However, I think you as an attendee will really benefit from the content that’s being presented.

My role is to start with some industry perspective to set the stage. If you’re new to oil and gas one of the things that you’ll notice is that we’re always in the news. In 2010 it was the unfortunate BP Horizon accident. 5 years ago this week, October 10th, the day that we did the course in 2011, the 11th Chilean miner was pulled out of the mine 2,000 feet down. The well was drilled with a rock bit that came from a small town in Pennsylvania. The drillers were from Colorado. Precision Drilling from Canada flew a rig in pieces to help save the miners. In fact, just this month there’s a new release of a movie called The 33. It’s the story of the miners as they survived this ordeal.

In 2012 the Houston Chronicle covered Shell’s Perdido project. It’s 250 miles south of Houston and almost 2 miles of water depth. Probably the most complex undersea production operation in the history of the planet which has gone very well and without a hitch. In May of this year 95,000 people attended one of the largest ever shows at the Offshore Technology Conference showcasing the technologies and operations of over 2,000 exhibitors.

With all the industry changes I had to make major updates to my May SPE presentation. As I did this, I became aware of how often the fraction 1/3 or 2/3’s became prominent. One of the things I’m going to start off to talk about today is the rule of thirds. My next topic will be the current rig count collapse and some of the possible causes. It will be followed by a discussion of the new oil game in the USA. The importance of shale oil and the success of 3 shale oil plays. Finally I’ll explain why a global, long term perspective is now important.

Let’s talk about this rule of thirds.

As I was doing the presentation preparation and after some research. I learned that the rule of thirds was first noted by John Thomas Smith, a scenery artist in 1797. In our graphics and video work at EKT Interactive oil and gas training we apply the rule of thirds to compose and edit visual images like in this picture. Imagine the picture divided into vertical thirds and horizontal thirds thus 9 equal parts. According to John Smith the important elements should be placed either along the lines or at their intersections. Aligning the subject with these points creates  more tension, energy and interest in the composition than simply centering a subject.

While I was in Saudi Arabia, as a scuba diver in the Red Sea we used the rule of thirds to plan our dives. This would help us ensure we had enough air to complete the dive safely. In planning a dive one third of your tank is planned for the outward journey, one third is for the return and one third is a safety reserve. When you’re diving with a buddy it may also be necessary to set one third of your buddy’s gas supply in your remaining third.

The rule of thirds is also used in the military. One third of the total military force should be available for operations. One third preparing to go on operations and the final third recuperating after the operations. So let’s start through our presentation and see if this rule of thirds applies to oil and gas.

This chart shows the absolute collapse and rig count, probably the largest drop in 30 years. The left scale in red is the rig count. The right scale in gray is the crude oil price in dollars per barrel. You can see from January 2012 to January 2015 the rig count was moving between 1,700 and 2,000 rigs as our crude price was wobbling between $90 and $100 a barrel. Today’s crude price when we put this presentation together was only $47.26. The rig count had dropped from its level of about 1,850 rigs to only 787 rigs. This last week it was down another 8. Here’s our first third. This is a two thirds decline in the rig count, again the largest drop in the last 30 years.

Some of the causes of rig count will be discussed as I go through the rest of the presentation. Is it because of too much supply? Is it because of not enough demand? Or is it really OPEC and the Saudis that are causing the problem? Really what we want to know, especially if you’re new to the industry, what is the impact on this decline on rig count and crude price on the business? What’s going to happen to me?

Let’s talk about too much supply. I attended Argus Crude Summit in January and an interesting presentation was made by a women from Ponderosa Advisors and it’s in this chart. The left scales is in millions of barrels per day and the bottom scale is the track of both supply and demand since January of 2007. The demand is the blue line and you can see the way it slowly wobbles up from a decline in 2008 at the last financial crisis and the red line is supply. Generally has been below demand giving us fairly tight supply but now, in 2015 you notice that the red line appears to be far above the blue line. This data is obtained from the International Energy Agency or IEA and it covers all of the liquids that are available from an oil well. Crude oil, the natural gas liquids and includes the non-conventional shale oils and tar sands that we’ll talk more about later.

The most important part of this slide is the gap or surplus as of January of 2015 is 1,500,000 to 2,000,000 barrels a day. As we go through the presentation you’ll see this NMBD over and over again. That’s stands for millions of barrels a day. You notice that in the 95,000,000 barrels or so that this is only 1% to 2% that we’re in an over supply situation. One of the key concepts of what is going on in oil and gas as well as other commodities, that small swings in supply and demand lead to huge swings in price.

The next question is do we have enough demand and is this a temporary phenomenon? In this series of charts that I’m going to go through, we’re going to talk about demand the way an economist looks at demand. He or she starts with population. This first column is the population of the major countries in the world in 2012 with India and China leading at between 1.2 and 1.4 billion people. Brazil with 200,000,000. Mexico with 121,000,000 and the US with 314,000,000 people. The next column is the 2012 oil demand, again in NMBD or millions of barrels a day. India has a countrywide demand on 3.6 million barrels a day. China is almost three times at about 10.2 million barrels a day. Brazil at 2.9 almost the same as India. Mexico at 2.0 and the United States was running about 18.5 million barrels a day in 2012.

When an economist looks at demand, he or she takes a look at how much demand is there per person in barrels per year? Again, if you’re brand new to this industry, I want to remind you that a barrel is 42 gallons. In India it is only 1.1 barrels per year, so every person in India is only using somewhere around 50 gallons per year. China is 2.8. Brazil is 5.2. Mexico 6.5 and the US has the biggest demand per person in the world at 21.6. This is not just the large SUVs and pick-up trucks you see driving around the roads in Texas but it includes all the manufacturing, all the industrial business, all of the power plants, anything that oil is supplied to the economy also gets captured in this number.

The most important thing in this slide is that how fast and how far India and China grow? If India and China just get to Mexico’s consumption which is 6.5 barrels per person, per year the industry needs to supply another 50 million barrels per day almost 50% more production than we have in the current global portfolio. So where did the third come from Marty? Over the period from 2010 to 2012 a third of the global demand came from China’s increase as they continued to industrialize their economy.

The third point I want to make a kind of a highlight is, is it really OPEC and the Saudis that are causing the crude price increase? Here’s another third and you’ll learn more about this later, that OPEC is one third of global production. This slide again came from the Argus Conference and was put together by the Center for Global Energy Policy at Columbia. What it rates is the estimated oil price required for a budget break even in 2015 for all the countries that produce oil and gas. Most of these countries energy, oil and gas supplies are their biggest source of revenue so they have to make sure that they’re able to cover their national budgets with a crude price increase. It ranges from the top when this was put together of $184 a barrel needed in Libya to only $54 a barrel needed in Kuwait.

I want to call your attention to Saudi Arabia which when this analysis was conducted, needed $106 per barrel. We don’t have $106 a barrel and the people have said that it’s due to the fact that Saudis have continued to increase production rather than cutting back like they have in years past. Economists have forecast even though Saudi Arabia is not recovering enough of their budget with the current $40 to $50 a barrel range, they have between 5 and 6 years of financial reserves to continue to keep the crude price down.

Let me take a break at this point and see if there are any questions.