“Water has become the lifeblood of the modern energy industry with hydraulic fracturing using high-pressured slurry of water, sand and chemicals to unlock oil and gas from shale formations in Texas and across the country.”

It’s ironic, isn’t it? That the nation’s most productive oilfield, literally consuming more than 195 million gallons of water per day, is in one of the driest parts of the United States.

Following the water business in the Permian is one of the rarely talked about but increasingly important topics of conversation.

As to not spoil the article, I highly encourage you to give it a read to visualize the sheer scale of what it takes to quench the insatiable thirst of Permian production.

Here at EKT Interactive, we are proud to have developed the Wellsite Operations Safety Course for the Pennsylvania State Fire Academy in 2010. So far, it’s been rolled out to over 6,000 first responders.

As the article points out, the shale revolution has transformed energy development in Appalachia.

“Appalachian oil and gas activities are continuing to contribute to the US energy renaissance both in terms of rising tight-gas production and by improving petrochemical opportunities, Asst. US Energy Secretary for Fossil Energy Steven Winberg said.”

West Virginia and Eastern Pennsylvania have a lot to be proud of. The “impacts are obvious across the Marcellus and Utica plays in Appalachia, which already are responsible for 85% of the growth in US gas production over the past decade and already account for right at a third of US production today. That share could reach 45% by 2040″, Winberg said.

Developments in oil and gas research in data science and machine learning should help the longevity of unconventional gas plays like the Marcellus-Utica.

“DOE also is pursuing data science and management tools to improve operational reliability and reduce the loss from gas gathering, transmission, distribution, and storage facilities”, he said. “We’re also beginning to look at cybersecurity, as well as continuing our focus on reducing methane losses. And we have several R&D pathways to help us meet these goals,” Winberg said.”

Winberg goes on to articulate the possible benefits of a petrochemical industry boom in Appalachia, an industry he argues could generate tens-of-billions in annual revenue and 100,000 new jobs.

This episode of the Texas Oil and Gas Podcast poises a general discussion on international demand, oil prices, and adds to the narrative that small E&P companies, especially in the Permian, are spreading themselves thin. I’m going to note some points from the podcast, the articles mentioned in the podcast, as well as provide additional commentary on the topics discussed.

Now over 5 years into its tenure as a publicly-traded company, Diamond Energy expects to finally run into some serious positive free cash flow. The company has been on a spending spree, acquiring assets at arguably lofty prices in the hopes of delayed gratification. The company seems confident they can make it worth investors while, but that pitch is losing faith.

Concho Resource’s earnings disaster is just another disappointing demerit against the credibility for shale producers to manage their spending. Layoffs, volatile quarter over quarter comparisons, it simply doesn’t cut it. The energy industry is pleading to be recognized for its value, citing low valuations and high dividends as a means for shareholder confidence. Unfortunately, upstream operations are capital intensive, dependent on the price of oil, high risk, and can go wrong quickly. Today’s market is geared towards nimbleness, low overhead, and preferably predictable cash flow (subscription models) with the ability to grow quickly. Hardware companies, chipmakers, energy stocks, retail, they all fall victim to the same reasons for negative investor sentiment. That may be harsh and unfair, but it doesn’t help when E&P companies continue to overpromise and underdeliver.

Bright skies and sunny days may not be in the forecast for shale producers. To quote the Concho Resources article from RigZone: “How companies still, after all these years we have wailed and gnashed our teeth, manage to over-promise and under-deliver, remains an infuriating mystery,” Mizuho Securities USA LLC analyst Paul Sankey said in a note to clients. “Do we really need to repeat, that a company, much least in the most hated sector of the market, with a premium valuation, must never, ever, over-promise and under-deliver?”

The narrative is painful. Share producers are stressed and struggling to achieve production increases in an environment bearing a lack of takeaway capacity, hard comparables, and reduction in the success of child wells when compared to parent wells.

Josh and Ryan, the hosts of the Texas Oil and Gas Podcast, argue that there needs to be increased stability with these firms or they need to simply sell to larger integrated companies that can do the job better. Either through self-management of capitulation, it’s high time to reduce redundancies and increase efficiency.

Andrew Slaughter (Deloitte) came on the podcast to comment on the industry. He noted that midstream will grow less in the next ten years than the previous ten years. The low hanging fruit has been picked in a similar fashion as with optimal drilling locations. Midstream and petrochemicals have runway though, given the secular growth trends with the two of them. Slaughter’s historical comparison of the Permian to other unconventional growth stories showed that the Permian isn’t unique. Traditionally, in any growth basin, production has typically gotten ahead of infrastructure. Bottlenecks happened in the Rockies (DJ Basin etc.) in the 90s, the Marcellus Shale, and the Bakken. It’s in the pipeline companies’ best interest to lag behind production. Pipelines are capital intensive and politically arduous. The last thing a midstream company wants to do is jump the gun on a pipeline and look foolish. Therefore, what we are seeing in the Permian is normal.

+ What we’re seeing in the field – The Drilldown: In-depth answers to oilfield questions episode 123

Oilfield services companies reported their Q2 earnings. They were bad, but Q3 is forecasted to be even worse.

Offshore and conventional wells had a steady rig count.

The greater than 15,000-foot onshore depth category is up 9% since the end of 2018 and has been steady since May despite declining overall rig count. This > 15,000-foot category now makes up 20% of active rigs today.

Less dominant onshore supermajors like Shell are choosing to drill >15,000 depths when they decide to dip their toes in a new play.

These bigger projects provide improved cost structure and a reasonable pitch to investors who prefer certainty and predictability.

Why the future of oil is in chemicals, not fuels – Chemical & Engineering News

Amid upstream volatility, it’s important to remember that midstream and downstream are ripe with opportunity. The U.S. petrochemical market makes up more exporting dollars than refined fuels.

Saudi Aramco is heeding a similar strategy to ExxonMobil’s high yield but expensive direct crude cracking technique. ExxonMobil’s Singapore Complex system processes crude oil, rather than naphtha. Whereas most refineries convert just 5–20% of incoming oil into petrochemicals, some 45% of the output of the new Saudi Arabian Yanbu facility will be chemicals, including olefins, aromatics, glycols, and polymers.

“The US Energy Information Administration predicts that US fuel consumption for light-duty vehicles will decline by 1% annually through 2050.”

“According to BP’s 2018 Energy Outlook, the share of the average oil barrel dedicated to transportation fuel will peak at 58% in 2025 and begin to decline. Oil consumed by industry, buildings, and power will also slump. Chemicals, however, will continue to grow, from 16% of oil demand in 2020 to 20% by 2040.”

“But the shift will have consequences. The larger scale of a refinery compared with a chemical plant means existing petrochemical markets could be swamped with outsize amounts of product.”

“The Yanbu project is significant because it’s an acknowledgment by Saudi Aramco, the world’s largest oil producer, that the future of oil is chemicals. In a recent speech to the Gulf Petrochemicals and Chemicals Association, Aramco CEO Amin H. Nasser pledged $100 billion in petrochemical investment over the next decade.”

Unlike other sectors, materials are projected to keep growing as a share of petroleum demand. 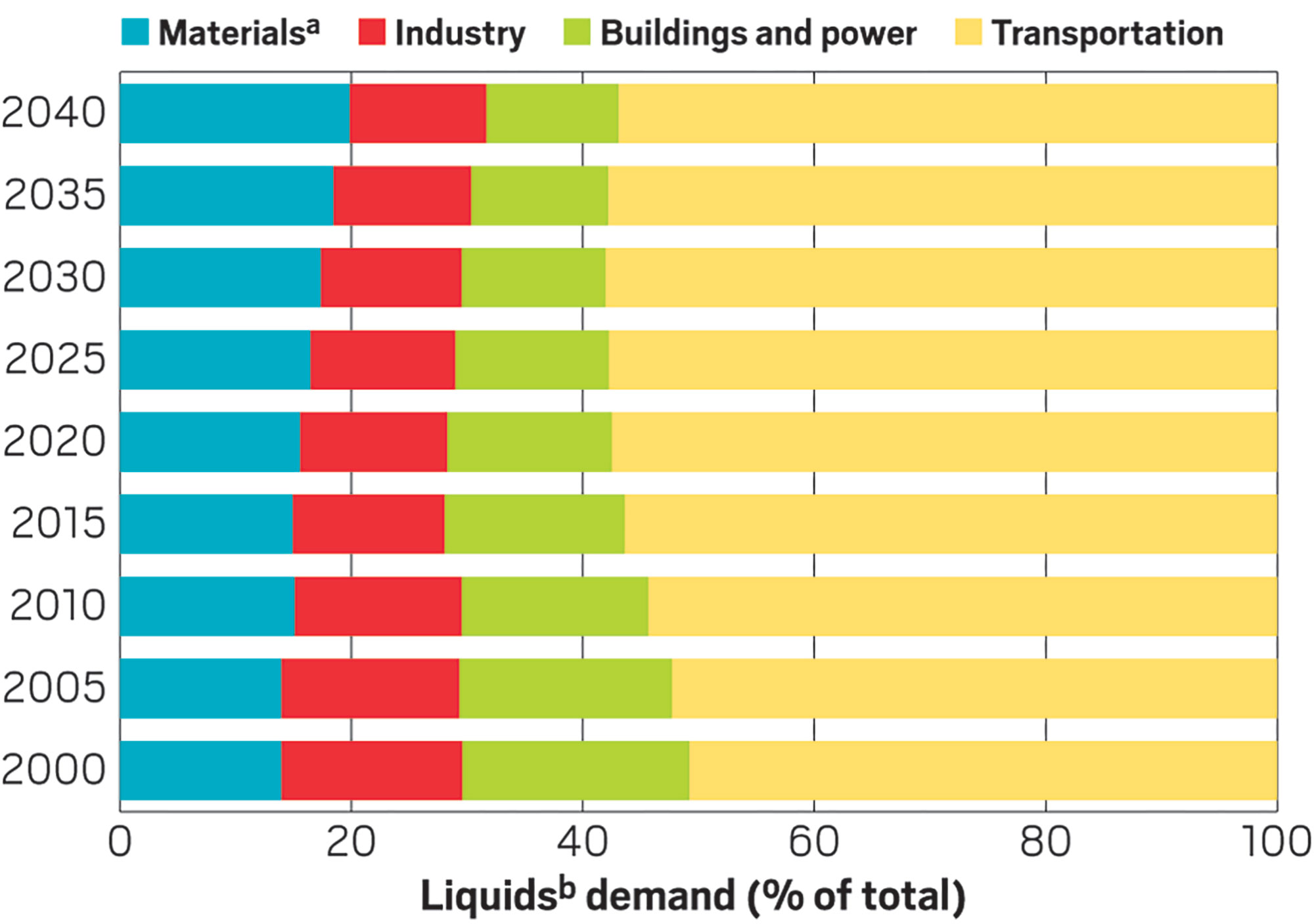 “Refineries, he points out, are a lot bigger than chemical plants. A 400,000 bbl per day refinery cranking out 50% chemicals will make about 10 million t of chemicals per year. The largest naphtha-based ethylene crackers make only 2 million t of products per year, he says. “When these companies start to reconfigure the whole refinery with the target of producing chemicals, that effectively elevates the petrochemical production to a refinery scale, which could easily mean 5–10 times higher,” Chang says.”

The article is worth a read for anyone interested in the dynamic between petrochemicals and oil refining.