Before diving into this week’s content, we’d like to remind you to join our Energized LinkedIn Group. We will be releasing frequent news and snippets of Energized newsletters through the group. We hope to see you there.

On Monday, the NASDAQ was down over 4% at one point but regained most of that loss throughout the course of the rest of the week.

WTI closed Thursday at just under $53. This is still a brutal weekly loss and puts the oil market average farther and farther from the coveted $60 threshold.

The energy sector was punished much more than other sectors this week.

Saudi Aramco cut oil prices for September sales to Asia but raised them to buyers along the Mediterranean and Northwest Europe.

If you aren’t interested in subscribing at the moment, here are some key takeaways:

As someone unfamiliar with offshore pipelines, I found this article fascinating. For offshore production, there are basically rigid, all-metal pipelines and flexible pipelines that use polymers. This article focuses on composite tape structures. Some or all of the metal components can be removed from the pipeline construction and replaced with thermoplastic composite tapes. Traditional flexible pipeline systems are heavy since hybrid construction includes heavy metal layers. Replacing metal components with unidirectional thermoplastic composite tapes makes the pipe lighter.

Using composite tape results in at least a 30% reduction in overall composite structure weight, leading to reduced pipeline transportation and installation costs. Most importantly, as deep-sea offshore drilling increases, the pressure demands of offshore pipelines intensify. Lighter pipelines can withstand these high pressures better than heavier pipelines, meaning this technology is less about reducing costs and more about performance.

Takeaway: “Although thermoplastic composite pipelines are still in the beginning of their history in the offshore oil and gas market, there are very good opportunities for them in future pipeline production. The correct combination of polymer, fibre, and composite manufacturing is needed to produce a safe and reliable product for the existing oil and gas industry, particularly offshore.”

This is a great read. If you want to learn more about the various polymers that are used, how these composites are evaluated, and more, I encourage you to check out the article. 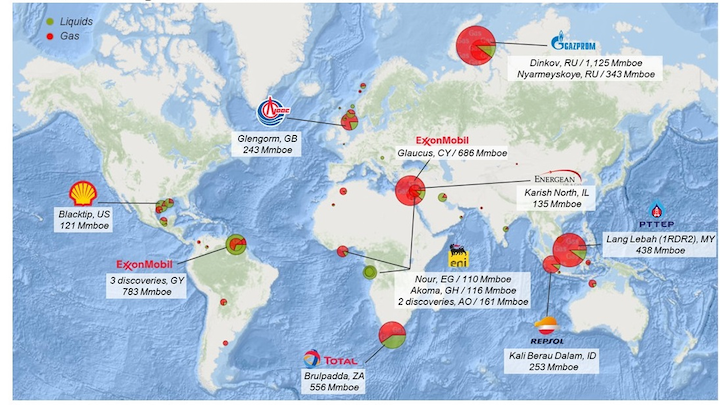 “Global discoveries of conventional oil and gas totaled 6.7 Bboe in the first half of 2019, according to analyst Rystad Energy. Average monthly discovered volumes were 1,123 MMboe, about 35% higher than the comparable figure of 827 MMboe in 2018. So far, 2019 has been a year of gas discoveries, which hold a majority (63%) share compared to liquids, a phenomenon not seen since 2016, the analyst said.”

While shale charts a course for maturation, offshore is setting sail for discovery. Maybe the reason why 80% of 2019’s discovered volumes have come from NOCs and majors is due to the increased competition onshore. Looking at the map by Rystad energy, the discoveries are occurring in varied geographies and by varied companies such as Gazprom, ExxonMobil, and Malaysia’s PPTEP. Many discoveries are gas plays, signaling bullish sentiment on the future of LNG and global gas trade.

“Shell Offshore Inc. has completed the sale of 22.45% non-operated interest in the Caesar-Tonga asset in the US Gulf of Mexico to Equinor Gulf of Mexico LLC, subject to approval of the lease assignments by the regulator. The total cash consideration was $965 million.”

This article is well done, but be warned, it’s very in-depth. It takes a look at the use of microbes for organic oil recovery.

It’s free to subscribe to UK-based Oilfield Technology. You’ll have to if you want to read the full article. In case you don’t want to, here’s one main takeaway:

“Creating micro-oil droplets allows trapped oil to flow more easily through the tight reservoir pore spaces. The interfacial tension between oil and water and the oil and rock surface is also reduced by the action of the microbes surrounding the micro-oil droplets.”

“The ally, which America hopes will play a more assertive regional role, is a weak link when it comes to oil security.”

Australia is a dominant player in the LNG space, but it’s ironically struggling to maintain its own energy supply due to expensive construction of LNG liquefaction plants and export terminals.

Next week, we’ll be diving headfirst into the Australia energy market for our August spotlight issue on LNG. For now, we’ll narrow our scope to just this article.

Essentially, the US wants Australia to be its primary energy ally in the Asia-Pacific region. But… Australia has exhibited negligence when managing its own energy reserves. “Australia has long been the weakest link in the world’s last line of defense against a disruption to the trade in crude oil. It is the only buyer of crude among the 30 members of the International Energy Agency without enough oil in storage to cover net imports for three months. It has failed to meet that IEA requirement since at least 2012. It has 57 days of net coverage in backup supplies, according to most recent IEA data.”

It remains to be seen if Australia can, indeed, be a dominant player in the energy industry. For now, a steep fall in Australia’s production and the closure of several refineries have weakened their position. For the past 40 years, in times of crisis, Australia has relied on individual companies, not countries, to buoy its energy supply. It would cost billions of dollars to build fuel stocks and storage infrastructure, a price Australia is simply not ready to pay since they are already spending a fortune on LNG liquefaction plants and export terminals, as well as LNG gasification plants and import terminals.

Stay tuned for our LNG spotlight issue next week, where we’ll be covering the global balance between LNG exporters and importers as it exists today, as well as discussing the role LNG could play in the years to come.

In Energized #14, we discussed a change in sentiment between investors and E&P companies.

There’s been a shifting paradigm, and many once accepted capital-intensive business practices pitched on the basis of growth are now being pitched into the trash for their lack of positive cash flow generation.

Jordan Blum seems likewise pessimistic about investor sentiment, citing that “the S&P Energy index is down more than 16 percent in the past 12 months even as the broader S&P 500 index has gained 9 percent.”

It’s always a bad sign when a sector is lagging the market (ahem, retail), especially when so many oil and gas stocks pay attractive 3+% dividends.

Blum argues that oil has failed to break out from $60, somehow finding a way to drip back down to the mid $50s time and time again.

In this newsletter, we’ve cited several examples of companies whose operations have breakeven prices in the low $40s or even the $30s. Some offshore projects, due to their massive scale and years of planning, can even have breakeven prices in the $20s or lower. Still, breakeven prices comfortably below current oil prices are a privilege that comes with size and diversified assets. There are many plays both domestically and abroad that are unprofitable or marginally profitable at current prices, dissuading investment.

“Some companies can still make money at those levels, but not enough to fuel significant expansions or satisfy increasingly impatient investors,” writes Blum.

The article goes on to discuss several points mentioned in this newsletter, such as slowing global oil production versus rising U.S production as well as the relationship between shale drilling efficiency but also rig count declines.

+ Lessons from the downturn: adjusting to the new reality – Offshore Magazine 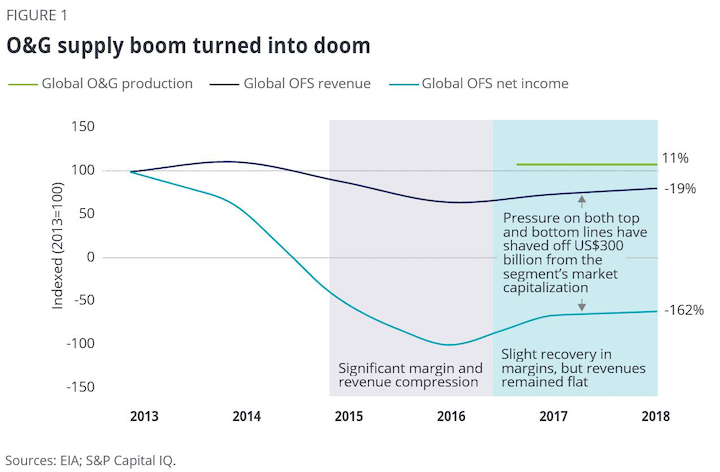 If you’re looking for a comprehensive progress report of the post-2014-downturn energy industry, this is it.

“Deloitte analyzed 843 listed O&G companies worldwide across the four O&G segments (upstream, oilfield services, midstream, and refining, and marketing) in an effort to gain a deeper and broader understanding of the industry. The ensuing research yielded a six-part series, “Decoding the O&G downturn,” which sets out to provide a big-picture reflection of the downturn and share our perspectives for consideration on the future.”

The article answers questions vital to gaining a complete perspective of the health and prospects of the O&G value chain.

“After a difficult 2015 and 2016, the industry began showing signs of coming out of the woods by mid-2018, with oil prices recovering to $85/bbl (Brent). Many industry executives appeared to regain confidence as their companies’ financials improved, resulting in growing optimism about 2019.”

“But then, oil prices surprised everyone by sliding more than 35% (Brent) to $50/bbl in the last quarter of 2018. If fears of oversupply and the three largest oil producers (Russia, Saudi Arabia, and the United States) competing for market share were not enough, the rise in geopolitical tensions and concerns of a global economic slowdown seemed to have dented the positive momentum built over the past 12-18 months in the oil market.”

“A fit-for-future O&G industry needs a healthy ecosystem of producers, service providers, shippers, and processors and marketers. Without it, the gains of a recovery would likely go to a select few, while losses from a downturn could affect many, potentially impairing the ability of certain segments to attract capital and grow sustainably.

…Although producers are recovering, and in some cases growing again, many in the oilfield services (OFS) segment continue to struggle for survival. For example, market capitalization of the OFS segment, which is the backbone for both shale growth and offshore revival, has fallen by half to $262 billion and the entire segment is now less than the size of the biggest supermajor.”

For more observations, takeaways, and lessons, I highly suggest you subscribe to Offshore Magazine and read the full article.

Huge news for followers for the Permian Basin. Plains All American’s Cactus II pipeline was set to commence line fill before the end of June. There’s been no further news on the subject, but assuming a line fill is either underway or incredibly soon to being underway bodes well for the Permian.

Plains All American announced in early June that they have over 90% of the pipe in the ground.

“With the impending start-ups of Cactus II, EPIC, and Gray Oak, there will be about 2 million bpd of crude capacity delivering into Corpus Christi from the Permian, with the majority, if not all, of the incremental supply destined for international markets via the docks,” Barclays analysts said in a note.